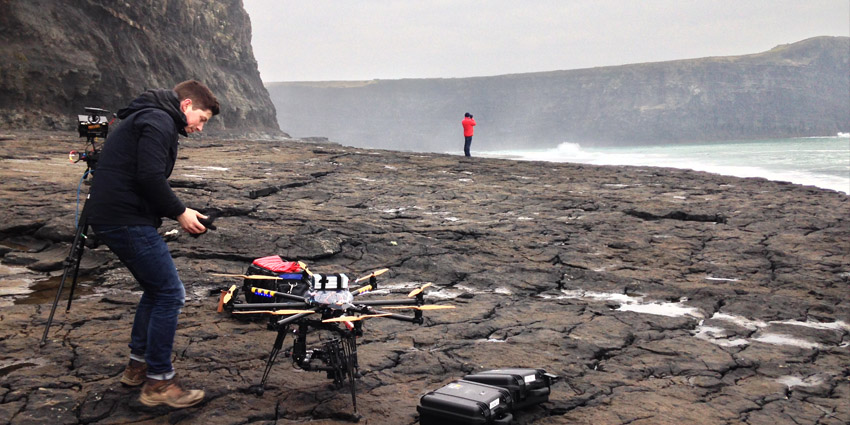 Holy Smokes those waves were big!

We recently took a trip to Clare County, West coast of Ireland with Mike Moran from Mojo Fuel to film a guy by the name of Tom Lowe. Tom would be hucking his arse down 20ft of water-wall directly off the Cliffs of Moher – a spot known as Aileen’s. Getting there is the easy part, well, it’s the easiest part at least – there is a road that links Dublin with Galway (direct) but its not on sat-navs so if you ever decide to visit this part of the globe yourself discard that little box with a woman inside, her spiel is poison!

It’s worth noting that this place is beautiful. Bonafide, Short Circuit’s Johnny 5 “B-E-A-UTIFUL” style. We were staying in a place called Lahinch in a boss little holiday home that was cold, but hey, your not meant to be there in March. Only nutters and surfers, and aerial filming fellas I suppose – think the opposite to Mad Dogs and Englishmen. Batteries on charge, its off for some grub, and being a seaside town Lahinch offered us up some superb seafood splendour – Alec had the chowder, I had a crock ‘o’ mussels. We had arrived. 6 Guinness later, we had left (the pub).

The next day we were on – the surf was up, the winds were low and the guys were hyped! I was scared! These cliffs are like non I’ve ever seen! I was told by a chatty local that many films were shot around the cliffs including Harry Potter, Snow White and the Huntsmen and the best one of all – The Princess Bride! We found a smashing little spot to launch from and got some great shots of our man Tom heading down to the shoreline, which by the way is a ridiculously treacherous path that zig zigs down the edge lined with mud, loose rock and dog poop – we would find this out later.

So the next day was much of the same – the surf was up and we there there to capture the action. Mike had suggested we head down the cliff and we found an amazing little spot that offered us the best vantage point to get the shots from, he wasn’t wrong. This spot was incredible, like literally blew my socks off wow. From this spot we managed to capture a few waves caught by Tom and the other guys in the water. It’s so nice to get above the surfers and see that different perspective – but we had to stay on our toes, every now and again Alec would provide a cue – “UP….UP!” as the waves came in it was hard for me to judge my distance so I had to bob up to avoid them!

The Afternoon saw us move to another spot about 40 minutes down the coast – Riley’s. Typically a body boarders wave it was heavy and dumps all in one go close to the rocky reef. True to the nature of surfing big waves, about 5 minutes after we arrived we saw a guy get airlifted out of the spot by the coast guard after suffering an injury. A reminder that this stuff is no joke! At this spot we got to film Tom paddling, jumping off rocks and basically chilling. This spot was a lot different to the cliffs – it looked like a volcanic tundra on the shore framed from the land by sheer cliff and attacked from the sea by the white gnarly surf. This gave us the opportunity to shoot some vistas and ‘action’ type moving shots across the shoreline. I love sweeping low across a natural subject, it went so well with the aggressive waves hitting the shore.

And that was a wrap, we had to leave the next day – and it was St Patrick’s Day at that….absolutely gutted! Oh well, what did Bewitched once say, c’est la vie.